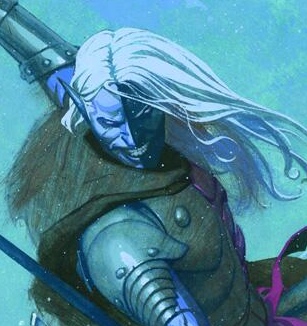 In Thor God of Thunder’s new story arc, The Accursed, the nine realms form a semi alliance to catch the mad dark elf known as Malekith. Although Jason Aaron starts off strong defining the feral nature of Malekith, after an issue and a half we rarely see him until he slips away again. Each issue becomes repetitive in the fact that the elfhunt quickly turns into a coyote and roadrunner adventure. Malekith could appropriately say beep beep as he flees on his griffon. One of the ways Aaron shows Malekith’s madness is by showing him slaughtering his thousands of his own kin; however, as the issues progress we only see the aftermath and the threat becomes a little more disconnected, especially when we get to the conclusion.

Although Jason Aaron promised we were going to finally be introduced to all nine realms, in the end all we got were glimpses. With the amount of detail to illustrate the epic scale during the Godbomb arc, it was a little disappointing that the same wasn’t applied in the land of the giants Jotunheim. In addition, with the exceptions being Alfheim and Midgard, there wasn’t anything that really stood out as uniquely identifying each realm or its people. However, Aaron did demonstrate his wordsmithing skills and peppered the exposition with fantasy nuances. For example, the henchmen weren’t drinking just a magical potion but a potion made from fairy blood and magical herbs.

The character development was a little lacking. If we weren’t talking about fantasy races, the writing would sound a little racist. Each character, giant, dwarf, dark elf, light elf, troll, and god all fit into their stereotype and never stretched out into something dynamic. This could be because there was little room in this arc for character development. Never the less, with Jason Aaron being a veteran writer for X–Men should know that team stories need the writers to pay attention to each character. Then, the “romance” between dark elf Waziria and Thor came off as a reenactment of an early 007 movie, where the sex is a little more forced than mutual.

The reason why Jason Aaron made a big splash in his first story arc of Thor was because he was able to perfectly blend cosmic fantasy with a relatable human story. Thor was humbled and Aaron purposefully didn’t use all of Thor’s powers. Aaron said he was going to let them seep in as Thor became wiser. In The Accursed, Thor’s demonstration of powers punched a few holes into the plot thread to where it left the reader going “well, if this, then why that?”.

In the end, if we overlook the undertones of racism and sexism and lack of character development and treat it as a story meant for the kids who just saw Thor in the theater, then it was a fun ride. However, for those who were looking for the same dynamic that made the first story arc great, then this is sadly not our story. Maybe it’s because the first arc had 12 issues to stretch and build upon itself whereas this one only had five issues. Yet, it’s confusing how the first two issues started off so strongly only to run out of steam by the time it hit the finish line. In fact, if people only wanted to pick up the first two issues and skip the rest, they sadly wouldn’t miss anything.