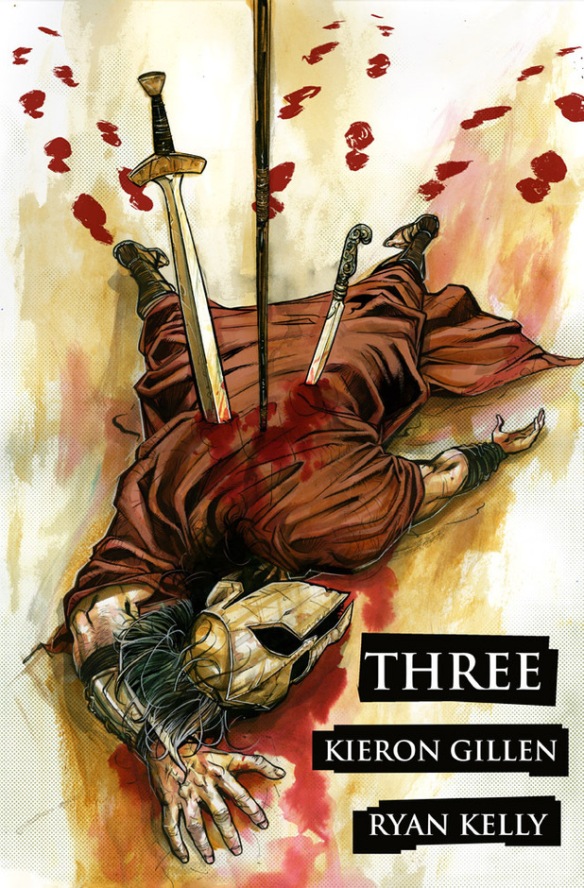 Due to popular culture, most people have heard of Sparta and their heroic battle of 300. However, few people know that for each Spartan a Helot walked in the warrior’s shadow. This is because the Helot’s were the Spartans enslaved class of people. Since only the ruling class write history, the Helots are only mentioned in passing and their history is sparse and speculative. After Kieron Gillen read Frank Miller’s 300 for the billionth time, he decided that the Helot’s were overdue for their five minutes of fame. Once he established a working knowledge and a relationship with an expert on Helots, he began to craft a story about a slave revolt called Three.

In order to establish the tension between the two classes, we are first introduced to a scene where Spartans are told to hunt down and slaughter Helots as rite of passage. This also introduces Kelly and Bellaire depicting flashbacks in a classy but brutal blood splattered black and white. After this intro to the classes, the story officially begins when a Phalanx of Spartans take shelter at a Helot farming encampment. It isn’t long before there’s conflict and all but Three Helot’s and one Spartan are slaughtered. This event leads to a fast paced hunt about oppression and tradition. Each installment is capped off with Gillen having an in-depth discussion with Dr. Hodkinson about the history of Sparta and their role in the Helot’s lives. With the progression of the story and interview, we discover why the archetypes of the main characters: coward, orator, widow, and crippled, are great representations of the rise and fall of Sparta.

Furthermore, not only did Hodkinson help Gillen write an accurate representation of this culture, but also he helped Kelly and Bellaire find an art style which compliments this tale. Although each character and location is clearly defined, they aren’t overly dynamic or detailed. The landscape shots are kept to a minimal and instead focus on the players of this tale. This approach clearly represents the character driven plot and the more simplistic era which it is being told from.

For fans of Miller’s 300 you will definitely find parallels by the time the story reaches its dramatic conclusion. However, this isn’t portrayed as an escapist blockbuster; rather, it’s more of a dramatic reenactment found inside an insightful documentary.