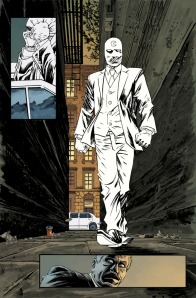 Warren Ellis just began a new on going series over at Marvel, Moon Knight. This seems sort of an odd choice considering many of his works deal with Trans-humanism whereas Moon Knight is a Marvel take on Batman with one unique twist. Instead of the Rogues Gallery living in Arkham Asylum, they’re living inside Batman’s head and came out in the form of split personalities. When Ellis was asked why he chose Moon Knight, he said he knows people with Dissociative Identity Disorders, and its portrayal in the previous incarnations of Moon Knight was grossly inaccurate. Therefore, Warren Ellis aims to give Moon Knight and its readers a reality check which will inevitably give us a fresh take. This is also interesting to remember because we have to assume Moon Knight is an unreliable narrator, and this could and probably will lead to many different twists. The story begins shortly after an event where witnesses saw Moon Knight standing in the middle of the street having a loud argument with Wolverine, Spider-Man, and Captain America although none of these Avengers were anywhere to be seen, and it was because he was having an argument with them in his head. This sets the tone for Moon Knight’s unstable mind. For the rest of the issue, Moon Knight has many one sided conversations which roll into the next one. These are often full of self-analysis and psychological profiling. This helps establish Moon Knight as a man who sees the world and everyone in it as one large puzzle waiting for somebody like him to put all the pieces back together. Furthermore, Moon Knight’s detached state of mind will also push him into dangerous and violent situations which put his cunning and conditioning to the test.

Artistically, Declan Shalvey and Jordie Bellaire have chosen a chiaroscuro dominated style. Although there’s a lot of inky shadows and the details aren’t elaborate, Moon Knight and his white suit really pop-out from the darkness. This is really appropriate because it brings to mind the full moon against the night sky, and each page feels like it is glowing in your hands.

The worst part of this issue was its introduction. Usually, Ellis will use the first page of his comic runs as a mini essay which establishes the characters, world and era. Instead his heavy exposition and thick dialogues explaining Moon Knight’s backstory choked up most of the panels for the first few pages. The pacing wouldn’t have been bogged down if it rather A) used his usual introduction or B) allowed his artists to re-imagine Moon Knight’s backstory. It would have been fair to take option B that way the readers and the artists can show us the stylistic changes and direction this reboot was going to take. Regardless, by the time it reaches its conclusion they have found their footing and pacing, so the next issue is sure to fly more smoothly.