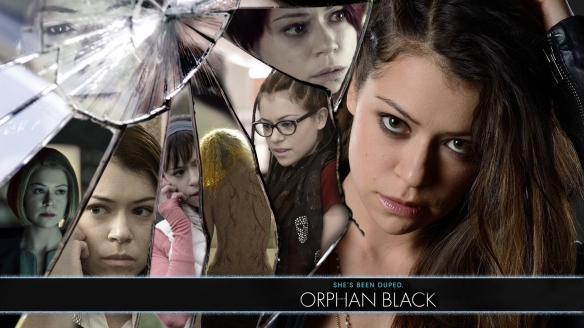 Like most good mysteries, the best way to describe the plot is the pitch. Orphan Black introduces us to a street girl named Sara. One day at a subway terminal, Sara sees a woman in distress when the woman turns to face Sara we briefly see that she’s an exact double of Sara before the double throws herself in front of a subway train. What follows is a multiple layered conspiracy about clones. Each character has depth and is uniquely defined. This says a lot considering Maslany plays seven different clones during the first season. It’s brilliant how she can completely morph into a different role in the same scene. Most cloned movies break the illusion and you begin to see only the actor and not the character; however, this is not the case. Maslany, Fawcett, and Manson work tirelessly to make sure the show never feels like a gimmick. For example, every clone scene is done twice with Tatiana and her acting double, Katheryn Alexandre. Not only is Tatiana trying to recreate each characters unique take, but also Alexandre is trying to act out the Tatiana’s body language, which really makes Alexandre more of an understudy than a double. There’s little wonder why Tatiana Maslany has won or has been nominated for several different awards for her performance in Orphan Black.

Because each character is unique and dynamic, it’s easy for the audience to become invested in each plot thread. However, because of the paranoid nature of the story, the creators do a great job of giving us enough to keep guessing who is behind what and why. Even when the audience correctly guesses who the antagonist is, this often just peels back another layer to their conspiracy and world. Another aspect of the creators genius is they don’t hold back on the ethical philosophies behind cloning technology. They dose it up with liberal amounts of nature versus nurture. For example, it shows dichotomies in the clones personalities. Each clone has a mixed bag of characteristics involving aggression, trust, neurosis, sexual orientation and so on. However, most of them share biological characteristics such as sterility and of course phenotypes. Also, the writers make sure to question the ethics behind cloning technology. Should there be trial tests like other medical inventions? Should scientists be able to patent the clones like one would with microchips?

Yes, this rabbit hole goes real deep. With the closing of the first season, Orphan Black has little interest in slowing down any time soon. Despite the heavy subject matter, the show’s pacing is kinetic and their momentum at the end of each episode rushes you to the next. Overall, this show has a great balance between being a thinking man’s adventure and escapist action.