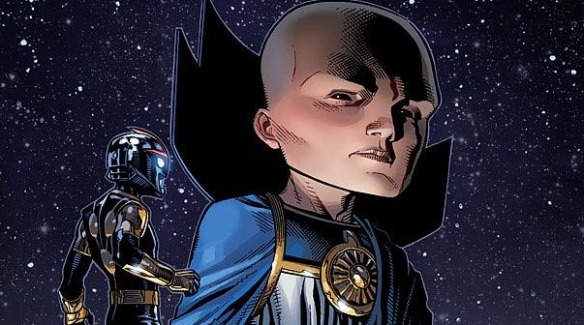 We’re introduced to the newest member of the Nova Corps and who currently flies with the New Warriors. Unlike other spin offs or crossover events, issue zero does a nice job of catching the readers up on who Nova is. In addition, it throws in a little skirmish to fully nail down the tone and character of Nova. Nova also becomes the relatable narrator. Because Nova is new to the world of Marvel’s Cosmic Universe, new readers are learning along with Nova. This makes it easier for the readers understanding when the story transitions it’s focus on The Watcher.

Presumably, by the time issue one hits the shelves The Watcher, Uatu, will already be dead. After all, Original Sin carries the tag line of, “Who Killed the Watcher”. With that in mind, it’s nice issue zero gives the readers a chance to know the victim and understand Uatu’s purpose. Otherwise, the crossover event of the year will retain little gravity.

Furthermore, the story arc is a classic who-done-it mystery. It will be interesting to see if this mystery will have re-readability to live pass its conclusion. Often these types of mysteries lose their appeal once the ending has been spoiled. Regardless, one of the greatest parts about these types of mysteries are the skeletons hiding in various peoples closets and how those secrets will influence their motivations. Issue zero already revealed secrets behind Nova and The Watchers motivations. Meanwhile, secrets are being revealed in other tie-in issues such as Avengers and Mighty Avengers.

What’s also interesting is issue zero revealed images from other Marvel continuities or universes. We’ve already witnessed Ultimate and 2099 universe converge into the Marvel Now continuity. Perhaps there are more forgotten characters or time lines waiting to be reintroduced.

There’s a large team of great artist behind this story arc and each panel shows it. There’s so much detail crammed into the backgrounds of the panels it almost looks like each section is fighting for attention. Wandering into The Watcher’s layer and exploring what he sees was a treat for the new eyes and old fans. There’s also plenty details given to hologram technology to give every cosmic fan a sense of nostalgic wonder. The colors and shading bring every character to life and the action feels like its exploding off the page. The Marvel Now cosmic titles show how much comic book art has been able to progress since the cosmic era of Jack Kirby.

Overall, we’re sure to see surprising guest appearances emerge from the shadows while other revelations will subvert our understanding of well known characters. Whether or not Original Sin can keep up with its promises remains to be seen, but its first shot in the dark certainly grabs attention.