This week, we talk about I Zombie, Agents of Shield, Arrow, Once Upon a Time, Future’s End, Original Sin, Batman, Gambit, and more! 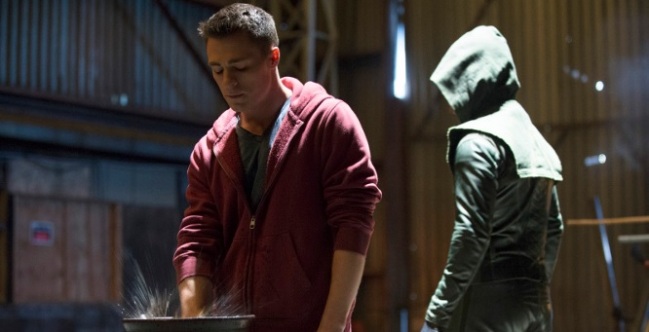 Arrow Season 1 was about Oliver “Arrow” Queen transitioning from a killer with a kill list to becoming the protector of Starling City. Overtime, Oliver had to learn to trust others and their help, successfully creating a quasi Justice League / Teen Titans superhero group. Although many were skeptical about Arrow being weighted down by the romance and drama like CW’s other superhero series such as Smallville, Arrow had managed to keep those parts to a minimum and gave a lean and mean superhero epic. The same can’t be said for their follow up of season 2.

Although the second season still has the look and feel of the first, that is nothing the producers should be proud of. The set production is still set primarily in the same Office Buildings, Warehouses, Mansion, and the Island. Each scene looks like a duplicate of the last time they were in this type of area. Maybe it’s time for a road trip or some different types of lighting or a new paint job but something should change. Even if they don’t yet have the budget to go into the mountains or a road trip, they could at least fill the offices with some type of details to be able to tell the differences between the DEA, Queen Industries, or Police Departments buildings.

Each episode usually begins with Oliver and Diggle discovering a crime, then they wait for Felicity to tap her keyboard a few times before telling them where to go as she watches Arrow run off with sad puppy dog eyes. More about that later. First of all, the writers must have pulled Felicity straight from the smash hit Revenge of the Nerds. Yep, the writers haven’t updated their stereotypes in about 30 years. If her nerdy portrayal didn’t feel dated then her “hacking” ability certainly does, Felicity’s hacking is so grossly inaccurate that it makes the movie Hackers seem like a programmers technical manual. Finally, Oliver consistently needing Felicity to tell him where and how to fight crime insults and undermines the hero’s abilities. Thus, Season 2 has successfully turned Green Arrow into little more than a tool. Even if the writers wanted to give more spotlight to the side characters, they shouldn’t sacrifice the whole point of watching a eponymous superhero series.

Although it doesn’t make much sense for this to be the highlight of season two, much of this season focused on Laurel Lance and her pill popping and alcohol dependence. It seems this could have been a nod to the infamous 70’s Green Lantern / Green Arrow story which focused on Roy Harper’s heroin addiction. However, this side story carried on for so long that it trivialized the whole issue. In fact, the only reason she became an addict was to overcome her grief of losing her short lived romance with Tommy Merlin. Everyone’s favorite Sara Lance aka Black Canary wouldn’t even exist if she didn’t fall in love with Oliver Queen and follow him where ever he goes, even if it puts her family in grave danger. After Moira “Oliver’s mother” Queen became widowed, she married Collin Salmon who took care of the Queen estate and corporation after Mr Queen died. Then she took the blame for Malcom Merlyn’s, another one of her lovers, villainy. Apparently, Moira’s role is to be consistently subordinated by the men she lets into her life. In addition, Felicity carries a sad torch for Oliver Queen. Oliver admittedly will never have any romantic feelings for Felicity no matter how many times she taps her keyboard and reads the next part of the script from her computer screen for him and Diggle. In fact, in order to break away from her feelings for Oliver, Felicity began a short romance with Barry “The Flash” Allen. Uh huh, that is the origin of The Flash spin off series. Did you notice that every female character in this series has only existed because of their male counterparts? If we rip the men away, none of the females would have any depth, motivation, or history.

Yes, there is a lot of name dropping to this series. However, much of this is marketing ploys to sucker in people who are familiar with the source material. Ra’s Al Ghoul, Harley Quinn and other A list names are only used in passing. That isn’t to say that the B list names such as Blud, Vertigo, Dead Shot, Deathstroke aren’t used more completely. Yet, it feels that the writers are biting off more than they can chew. They keep adding more names to their rosters without successfully fleshing out or furthering the plot. For example, it’s pointless to bring in Deathstroke if the story is still focusing on Laurel’s drug addiction, especially when his sub-plot has nothing to do with hers. There are too many loose plot threads and now every announcement of a new character means there is going to be one more added to the knotted mess.

The only good thing to come out of season 2 is Roy “Speedy” Harper. His characterization has been the hidden and brilliant gem of this series. He starts off as a selfish jerk who has a life altering experience when he is saved by Arrow. We see Roy’s humbled realization that he was saved by a normal man just trying to help the people around him; therefore, Roy begins his crusade of trying to fight for justice and imitate the Arrow. Although he gets beat up many times, Roy refuses to give up the righteous fight. This causes his girlfriend Thea “Oliver’s sister” Queen to become worried for Roy’s safety and forces him to quit. This forces Roy to conceal his nights of being a vigilante from his girlfriend. This is a much more believable reason for having a secret identity. Harper eventually becomes empowered and we see a more believable story of a man learning how and when to control his abilities. This side story isn’t burdened by some weird “Love Hexagon” or any other romantic drama this network is known for. Instead, Roy “Speedy” Harper’s story is a trimmed down no nonsense hero’s journey. It is a perfect compliment to the transgressive hero story we saw from the first season. Overall, it’s a shame the writers decided to try and fit the Comic Book story into their more familiar territory of a teen drama. 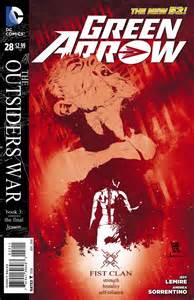 Lemire, Maiolo and Sorrentino’s Green Arrow: Outsider War begins with Oliver going on a quest back to the island to find the sacred arrow. Meanwhile, the prior events have pushed Oliver Queen into the center of an all out attack from the Outsider Clans. The story showcases the strength of each clan such as the clan of the Arrow, Shield, Staff, Fist, etc. True, this sounds like 50’s pulp pulled from the pages of Doc Savage or Allan Quartermaine, but it retains just as much blockbuster excitement if not more so. What makes this series truly stand out is how the creative team works off each other. Oliver’s projected personality is similar to the clichéd playboy. However, from the green internal monologues to the shifting backgrounds and landscapes we see who Green Arrow really is. For example, if the scene is brutal or violent, the backgrounds become more angular and saturated in red. If the scene is menacing or ominous, the background fades into inky shadows. This style is very reminiscent of gothic literature or various styles of anime which took the internal state of mind and made external representations. Another great showcase of detail is the depiction and characterization of Oliver Queen’s father. His mannerism and look all the way down to his signature beard is a direct homage to Oliver Queen’s depiction in Green Arrow: Longbow Hunters. The creative team may be updating and modernizing our beloved Green Arrow, but we can rest assured that our green archer is in good hands. Not only does the team work brilliantly together, but also they know where and who Green Arrow comes from.