Even in the far future, corporations will develop space technology only to explore, mine and harvest needed resources for their giant corporations on Earth. This story focuses on Caliban, a transport ship which carries the miners and supplies to resource rich destinations. Although this sounds like a grand adventure of exploration, for the crew it’s mind numbingly boring blue collared job at least until the Caliban makes first contact while in warp space.

Ennis begins this new space truckers story arc with a less is more formula. We’re introduced to Nomi with the starlog Sci-Fi trope. However, instead of wasting panels on world building, and history lessons, Ennis uses Nomi’s narration to establish the tone and world this mission is set in. Garth Ennis is a master at writing tight dialogue which still adds layers of depth and personality to each of his characters, and Caliban is no exception. From using nervous stuttering, words like “stuff” to describe technological “things”, to the jokes and insults, each character is uniquely defined within a panel or two. Also, Ennis uses the lack of Alien contact since the beginning of space exploration to emphasis the isolation and mundane lifestyle of a space trucker. Not only does Ennis show the improbability of a collision in a warp zone, but also the collision involving contact with alien life only adds to the mystery of the situation.

While Garth Ennis takes a less is more approach to Sci-Fi, Facundo Percio embraces the opposite. Percio artwork is crammed into every bit of cargo space of the ship. For example, the backgrounds are heavily layered with control panels, monitors with multiple lines of code, wires falling out of each console, even the Caliban clothes are highly detailed with patches, buttons, zippers and so on. Furthermore, although the characters are expressive during conversations, their eyes quickly become lost in vacant spaced out stares which adds the feel that the crew has been on this ship for much too long. The cramped panels, the vacant stares, and the warp space collision just further the overall claustrophobia of space travel.

What is always amazing is how Garth Ennis is able to use minimalist tight dialogue and narrative and create a psychologically tense thriller which keeps you guessing what will happen next. In addition, Ennis will lace his stories with just enough hyper realism in order to establish a familiar connection, rather it be mythology, conspiracies, or quantum theory, and it just shows how much care and detailed work Garth Ennis puts into his stories. It’ll also be interesting to see how Ennis writes Shakespeare’s Tempest into this Sci-Fi mystery. Ennis combined with Percio tireless artwork are sure to give us another great psychologically and claustrophobic thriller. 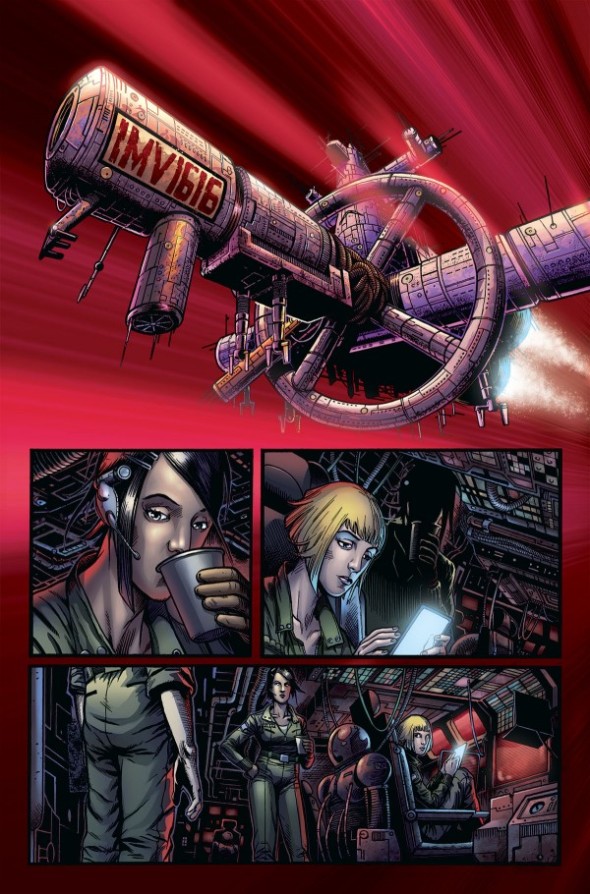