Those goofy and out of this world Avengers gotten themselves into a sticky mess this time. Hawkguy is being chased by the evil A.I.M. before he runs in and like totally ruins Black Widow and Spider Woman’s girl day at the day spa. Meanwhile, Fury and Colson are uncharacteristically bromancing all over S.H.I.E.L.D’s damaged Satellite. Only to be attacked by The Fury. Wait there’s two Fury’s sharing the same scene? Moving on. To make matters worse, creepy M.O.D.O.K’ is trying to get his war game on with Director Hill before her lovely S.H.I.E.L.D HQ gets infiltrated. Really, the plot is just something to carry the reader from one tongue and cheek joke to the next slapstick hijinks.

It’s Ales Kot’s uncanny characterization skills which highlight the funniest moments. In addition, it’s fantastic one of Marvel’s series have finally adopted Fraction’s incarnation of Hawkeye. One of Marvel’s draw backs is writers will portray the same character an infinite amount of different ways.

Therefore, within one month Hawkeye’s personality will run the gamut with his 16 point personality profile. However, with Fraction’s Hawkeye getting nods from various awards, it’s clear which one incarnation is coming out on top. Hopefully, this means Hawkguy will no longer suffer from Dissociative Identity Disorder.

Yet, the same can’t be said for the other characters. Black Widow is less femme fatale and more valley girl. Nick Fury is less Sam L and more creepy sex predator. Agent Colson is less Agent Colson and more Maxwell Smart, and so on. Ales Kot’s characters are inconsistent with the rest of the rest of the MU series. One can’t help but wonder if they are parodies of themselves. The story spirals off in several directions and begins to have larger holes than the one bumbling Colson blasts through S.H.I.E.L.D’s satellite. Maybe this too is self referential. If it is, the story lacks focus or clear parallels to other story arcs. Because of the exaggerated situations with popular Marvel players, it’s hard not to read this as some sort of Mad Magazine parody, which is completely fine. Self referential humor and irony is always trendy, but Kot’s delivery isn’t punching through.

Furthermore, Marvel is starting to diminish the novelty of their other lines such as Superior Foes and Hawkeye. Marvel is creating a formula by taking a comic book writer known for their postmodernist and nonlinear style of storytelling and wrapping it up with minimalist artwork. When they first announced Ales Kot taking over Secret Avenger’s it should have been safe to assume this was going to be something similar to what he did with Suicide Squad or Wild Children. A thematic and cerebral plot which had fourth wall breaking characters who kept it fun and sexy the whole ride through. Instead, Kot somehow delivered a functional parody which at best is derivative and at worst a mad house. 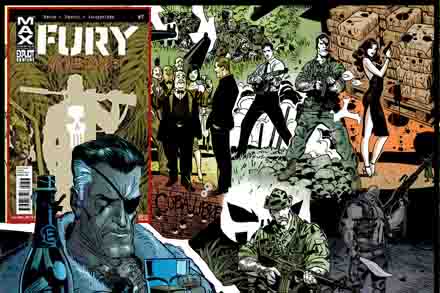 Garth Ennis returns to Nick Fury to deliver one of Marvel’s best Max releases. Ennis delivers a story that focuses on Nick Fury wrestling with his inner demons caused from years as a black op. The story begins in the modern day with an embittered and old Nick Fury confessing his battle scars into an old reel-to-reel recorder. Then, we’re taken to a time shortly after World War 2 where Fury believes everything started to go downhill. Shield is now just a pseudo name for CIA’s covert black ops unit. After World War 2, Fury and the readers discover that war has changed, and it’s now become a bureaucratic way of empowering various powers to be. So, a large portion of the story we see Nick Fury struggling with issues about rebels and the CIA creating unwanted revolutions, or the CIA is using the military to run drug deals in order to finance these hidden wars.

Meanwhile, there is rich character development. Garth Ennis peels back the veil and reveals Frank Castle’s motivation. All these black ops required men like Fury and Castle to shoot selected targets. This dehumanization and devalued regard for human life had blurred the lines that separate home from the war zone. When Castle returned home, all that changed was he got to select who his targets were. It’s how he made sense of the world.

We also see Fury have a prolonged affair with a politician’s wife, Shirley DeFabio. Who is a secretary who escaped the mean streets of New York by using and manipulating men in powerful positions. Although their relationship was confined to a bedroom, they needed it so they could still feel something for another human life. However, Nick Fury knows that if he left the war zone to become domesticated he will inevitably follow Frank Castle’s suicide run. There are men who go fight in the war and come back relatively unscathed. Then there are men like Frank Castle, Nick Fury, and Barracuda, whose killer within awakens and their old self never comes back.

Although Garth Ennis has been accused of glorifying excessive violence by Stan Lee himself, it’s how he uses the violence and other mature aspects of the story that define his style. In this story in particular, he uses violence, sex, drugs, alcohol, and so on as red flags of a flawed individual. When Barracuda kicks a dead fetus at Nick Fury, it’s to horrify the readers and show how disconnected and apathetic these soldiers have become. There are graphic depictions of sex but this is the only intimacy we see throughout the whole arc. This is highlighted by when Frank Castle and Nick Fury are on a mission, and we have panels upon panels of complete silence. Garth Ennis also uses real world scenarios such as CIA and Contra forces trafficking coke for the rebels, or the CIA and Contra controversially funding and supporting freedom fighters in various Soviet controlled countries of the world. These real anecdotes pepper the story with more punch and make us question the mentality of a man who had to carry the weight of CIA’s dirty laundry.

Major praise should be given to the artist Goran Parlov for being able to hang in there for Garth Ennis. He managed to not flinch or shy away from the depictions of brutality. Also, Parlov was able to show our characters slowly age from head to toe, from a head of thick hair to thin and grey or from a perky toned body to a sagging and wrinkled sack of flesh. Although his art popped from the pages and was rich with detail, by the end the art made my hands feel dirty.

This is a great series which shows how to do a story for mature readers. It didn’t settle for merely giving the reader mature eye candy. Instead, it brought a lot of heavy political commentary to the table and spoke to the reader like they were adults.