Lately, the news headlines have actually been interesting. It is not the fact that satirist have finally drawn the line, or that we are oppressing them their artistic expression. but it’s the fact that other people or other organizations are actually attacking them, fatally attacking them in some cases. A lot of people seem to be wondering why people believe strongly in these fictional depictions of their deities, and why are they so mad?
It reminds me of when I was a child. One of the big scary topics that most people can relate to being terrifying is child abduction, and this was deathly hot topic when growing up. For me, I never feared those strangers in the trench coats and the black fedoras or whatever the propaganda depicted them to be. 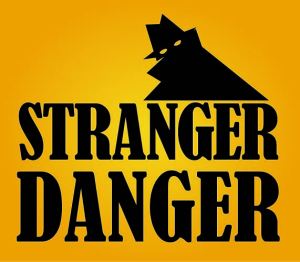 I thought the most terrifying child abductors were alien abductors. I mean, while I was alone at night shivering under my blanket in my ninja turtle PJs, I how would seriously imagine that aliens were outside my window just staring at me waiting for their chance to take me. I believe these aliens had actually conquered space and time. They have evolved to a point that we humans no longer identified with them biologically. Their whole conquest, their whole soul purpose in their whole history of their very being in this universe was to become the most sophisticated advanced child predators. That was my conclusion. 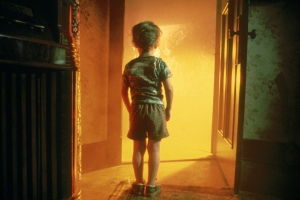 I know. I was a very impressionable young lad and quite honestly that’s probably not the most bizarre thing I used to be terrified of while growing up. Nonetheless, hear me out before you place judgment. The reason why I had this terrifying belief was because of Steven Spielberg. the master storyteller himself. I blame Spielberg. Here’s why.
In 1977 Steven Spielberg chose to release a movie that was entitled Close Encounters of the Third Kind. There was actually a scene depicting a child abduction by aliens, so it wasn’t quite unfounded. Yes, I know that was a movie. How dare I compare reality to a movie?

What type of alien did you imagine, standing outside my window, staring at me, and waiting for the perfect opportunity to take me and utilize their anal probe technology? Were they short gray people with bug eyes, big black bug eyes with a big noggin? Most of western society would agree with you. That mass hypnosis was because of Steven Spielberg. He made that possible for us all in 1977 when he released Close Encounters of the Third Kind. This is the first time we ever saw an alien like that. Take a second and realize that our culture, our minds, our imagination is collectively conjuring up an alien creature which did not exist before 1977.

Now, here’s the preposterous thing. Here is the idea that makes one question reality. In the 1990s, there was a huge ordeal about this released film called the alien autopsy. Our culture tried to retcon our Alien continuity. A lot of people pitched this film not as a fictional depiction of aliens being dissected, rather this was being pitched as rediscovered film evidence of an alien that was recovered from the Roswell crash. Supposedly, this was a Roswell alien being dissected before our very eyes. Guess what? It was a little gray alien. To this day, although the film footage we all saw was faked, people say it was very closely based on a real film reel of an alien autopsy. This is unbelievable. Despite the cinematic evidence, despite the fact that these types of aliens completely do not exist in all the universe, we still for some reason hold on to this belief, this cultural belief that if we did have an alien autopsy film it would most definitely look like that. 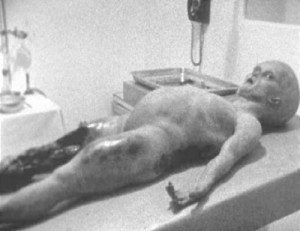 Now, this is like saying we found uncovered photographic evidence of Mickey Mouse being dissected because Mickey Mouse, just like the aliens Spielberg created for his movie, is only an artist depiction of something fictional.
I find it amazing that storytellers can actually pull things like this off. This is the foundation of movie magic. There’s no way a young Steven Spielberg had the foresight to believe that his movies, Jaws and Close Encounters, were going to create a small form of mass hysteria which would last for generations.
So, I’d like to talk about Orson Welles because he also attributed to our mass hysteria towards aliens, and yes, I’m talking about his broadcast that happened on October 30, 1938. For those who don’t know, Orson Welles did a radio broadcast of War of the Worlds. In fact, it was so magnificently produced and enacted, there were people who actually believed that we were being invaded by Martians. It was done so well there are conspiracy theories dedicated to how the production was pulled off.
Before we start imagining farmers running outside with their shotguns looking into the starry night wondering where these Martians were, we have to understand the culture and mindset of the people during that time. The world had just experienced the first great war. At the time, The Great War itself achieved the highest body count and committed violent atrocities that were previously unfathomable. Then the western world sunk into the Great Depression. Now, that farmer we imagined running out all excited like. He’s more than likely getting his farm taken away, and his livelihood, his tradition of being a farmer was nearing its end. Unbeknownst to many was the only light at the end of the tunnel was that his unemployment would end by becoming a soldier for the second great war World War II. Many people like this farmer were about to go overseas and be put on the front line and undoubtedly face their own annihilation. When one is put into this very bleak and stressful situations, our mind has a tendency to be very malleable, very easy to manipulate. It becomes a sponge towards very well told stories which give our lives a little bit of wonder.
This belief system is something that humans never actually evolve past. This is something that still prevails today. People find themselves facing the lowest point of their lives. These day-to-day lives which are mediocre, repetitive, and monotonous. Most of the workforce in the “better” parts of the world consists of servitude and labor. Then life can throw a curve ball and your phone has a tragic message. Maybe it’s about infidelity, miscarriage, terminal illness, fatal accident or any number of everyday things. Then maybe you look up in the sky and you see an epic battle between angels and dragons, and all of a sudden fate handed you your chance to redeem your mundane existence. I am not saying this will happen. However, there are millions of people out there who believe Revelations is a possibility. It’s simply because most religious texts are righteously told stories.

Because my mind has an inclination towards all things SciFi, it makes me ponder. If it hadn’t been L Ron Hubbard who wrote those atrocious Battlefield Earth stories, instead SciFi religion sprung out of the minds of the master storytellers like George Lucas and Steven Spielberg, I have definitely been devoted. That’s how belief systems work. Whatever story can fool you into suspending your disbelief, that point where it starts merging with your cognition, that is where anything’s possible. In conclusion, all I am really trying to say is there should be caution taken when one is trying to satirize people’s beliefs and the stories that they treasure.

This episode of LCBM explores how great storytellers, such as Welles and Spielberg, can help shape cultural beliefs for generations.